Portrait : Ursula and her Golden Retriever, “the boys” 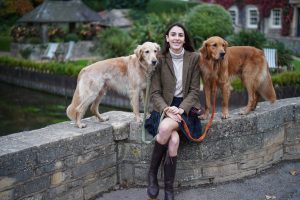 Your first meeting with them :

I collected Hugo at 12 weeks old from his breeder in Wales after a 4 hour train journey to get him, he was very quiet and a little worried ,he slept

the entire journey back  with the exception of peeing on the floor of the train ( first and last time! )

I went to meet Huxley and his brother at 8 weeks old, he was much bigger than Hugo had been despite the age difference. He was very bouncy and sat on my lap for the ride home, looking out the windows taking it all in. 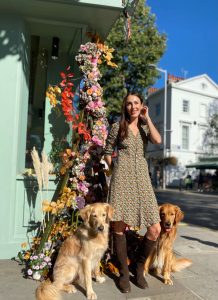 Ursula, Hugo et Huxley in front of the Les Néréides Chelsea store during Chelsea in Bloom

Hugo is so loyal, he loves everyone but he always looks to me when he receives attention to make sure I approve and he is allowed it. He is always close by, wants to please you and is the ultimate companion

Huxley is such a goof, he makes everyone laugh and sometimes I feel like he knows exactly what he is doing.

Hugo won’t ever let me be too far away, sometimes it can be difficult because he barks until I am next to him.

Huxley likes to run off in country walks, crashing about out of sight and I worry that he may get lost! 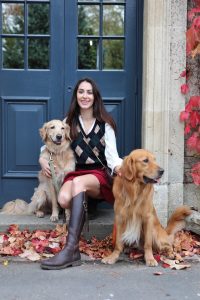 What their presence brings to your life?

The fact they always live for the moment. It’s a constant reminder we should try to too! 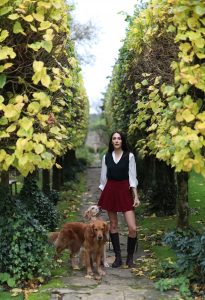 Once Huxley escaped in the middle of the night, he was gone for over 30 minutes – When he was found he knew he was in trouble so he rolled over onto his back wagging his tail to say sorry, it’s so hard to ever be angry with a dog!!! 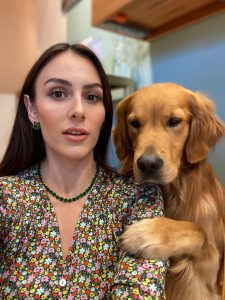