We propose a new type of article: Portraits. The principle is simple, we meet a pet owner and their adopted animal and we do a small interview. Our first duo is Diane and her dog Jim whom we met in their home in Paris.

Her name is Jim! Do not be fooled, she is a girl! I called her Jim because I love this name and it’s unisex! It’s a name of character and given her history and her mix, it suited her perfectly. Moreover, I really like the song La Balade De Jim even if it’s pretty sad. She is a cross of American Staff, hunting dog type Spaniel or Braque, and Terrier, Jack Russell.

– Can you you tell us about your first meeting?

Our first meeting was at the fast food restaurant of the mall of Chartres, not very glamorous I know! I was waiting for her there because she was coming directly from Spain through a dog carrier of the association that made a detour by Chartres before taking other dogs to England. She was lying on her feet, she was looking at me with her big green eyes, tired, I took her in my arms like a baby and she did not move again until we reached Paris.

Her madness, which is also her worst one. But her best quality is that she is very affectionate.

– Does she have a nickname and if so, why?

She has no nickname, it is often Jimette or Jimmychou in the moments of tenderness.

– What does her presence give you on a daily basis?

A lot of good humor, joy (she is always happy) and tenderness.

– Which rescue did you go through to find her ?

The association Olivenza Rescue in Spain via a person based in Paris. Spain is a country that is experiencing a lot of dogs being abandoned. 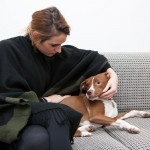 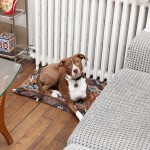 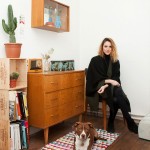 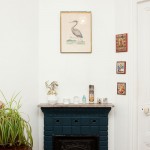